Full Documentary | I Am Fishead – Are Corporate Leaders Psychopaths?

Generally, it’s a well-established fact that a small percentage of society causes a disproportionately massive amount of problems and suffering for the rest of us.

We’ve always wondered what holds humans back from creating the kind of society we’d all love to see. We used to call it evil but now we know that some people don’t have the capacity to empathize or be remorseful.

The documentary ‘I Am Fishead: Are Corporate Leaders Psychopaths?’ examines whether the people at the top are more likely to be psychopaths than the rest of us.

The neurological definition of a psychopath is someone with small amygdala (lesser fear response) and often with less connections to the frontal lobe, the centre for reasoning. There are many people like this and the reasoning is that these people are more disposed to taking risks and are therefore more often in a position to take advantage of an opportunity. A psychopath is a risk taker and often fearless of most consequences.

It really boils down to how you define evil. Some derive pleasure from causing others pain, and this is the litmus test for purely evil behavior. If you don’t derive pleasure from killing the man behind the counter because he won’t hand over the money, or from signing the paper that privatizes the water supply in a small nation, but you do it anyway, because you want the reward, this would still constitute evil but to a lesser extent. In the first case, the thrill and positive emotions of performing the destructive act is your reward. In the second case, the reward lies in the payoff from the act, and the suffering you cause is just unimportant.

This is looking at it from an individual level however. From a societal perspective, the ‘lesser’ evildoers, or the sociopaths, are probably more dangerous, because they differ less from the average guy. They are just ready to go that one extra step to attain what they crave. Put in situations where that kind of behavior is rewarded, and the responsibility is diffused or non-existent, they are likely to thrive. 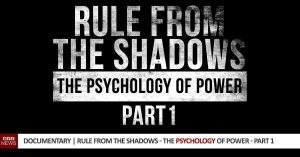