The Future Doesn’t Need Us… Or So We’ve Been Told.

With the rise of technology and the real-time pressures of an online, global economy, humans will have to be very clever – and very careful – not to be left behind by the future.

From the perspective of those in charge, human labour is losing its value, and people are becoming a liability.

This documentary reveals the real motivation behind the secretive effort to reduce the population and bring resource use into strict, centralized control.

Could it be that the biggest threat we face isn’t just automation and robots destroying jobs, but the larger sense that humans could become obsolete altogether? 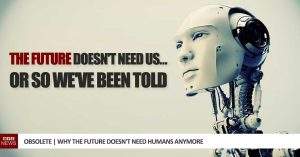