The Catholic Church has always been up to its neck in accusations of child sex abuse, it is less a place of peace and prayer for the lord almighty, but more a place for perverse old paedophiles to sexually abuse children on a grand scale.

Seven percent of an entire nation’s Catholics priests accused of sexual abuse, that’s a shockingly large amount of an entire profession being involved in this heinous crime.

The commission, Australia’s highest level of inquiry, reported 4,444 alleged incidents of sexual abuse by Catholic priests between 1980 and 2015.

The inquiry also heard that 1,265 priests and religious brothers and nuns had been accused during a 60-year period ending 2010.

“These numbers are shocking. They are tragic and they are indefensible,” Franklin Sullivan, head of the church’s Truth, Justice and Healing Council, told the commission in Sydney.

“Children were ignored or, worse, punished. Allegations were not investigated. Priests and religious [figures] were moved. The parishes or communities to which they were moved knew nothing of their past. Documents were not kept or they were destroyed,” she said.

“Secrecy prevailed, as did cover-ups. Many children suffered and continue, as adults, to suffer from their experiences in some Catholic institutions.” [source]

But Australia’s Catholic Church is no different to any other Countries, all are infested with immoral and disgusting human beings. You know it’s an issue when Wikipedia has an entire page dedicated to ‘Cases of Sex Abuse Within The Catholic Church By Country’.

One thing is for sure, the true scale of abuse that is being carried out within the Catholic Church is far greater than we know (and far more sinister) 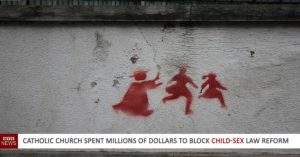