Millions Of Women Protest Against…….. What Exactly? Following the Inauguration of Donald Trump on Friday we have seen huge protests across the World.

Millions of Women have joined together upon the Streets of major cities across the World to protest against……. What exactly?

Well, some have issues with the taxation of Tampons and birth control as actress Ashely Judd points out in the bizarre speech:

Where are all these millions of passionate women protesting the streets when actual sickening crimes have been committed by the political institution?

Politicians grope and rape young children and the streets are empty; parents search for the remains of their children who have been blown to pieces by US bombs signed off by the former US president-elect in Syria, Pakistan, Afghanistan and Iraq and where are these Women?

Lou Collins, Radio host and activist made a very good point on this:

The last United Against Child Abuse rally I attended about 80 people turned up outside Westminster, shame these women don’t feel as strongly about the abuse of children carried out by their own governments and institutions as they do about Mr Trump.

Wearing pink, pointy-eared ‘p****hats’ to mock the new president, throngs of women descended on the US capital and other cities around the globe on Saturday for marches and demonstrations aimed at showing Donald Trump they won’t be silent over the next four years.

Watched protests yesterday but was under the impression that we just had an election! Why didn’t these people vote? Celebs hurt cause badly.

While people freak out about Donald Trump I wonder if they consider Obama’s legacy as President? 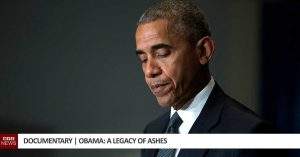 It is worth noting that these protests as with any protests of this high profile nature are highly organised and highly funded by organisations which have their own political and geopolitical agendas, with George Soros of course, being one of the biggest financiers behind this particular protest:

It’s difficult to determine just what direction those that have funded and organised these protests are aiming for, but whatever direction it is they wish to go the only beneficiary is their own pockets. They care not for you, for me, for our children. They care not for the welfare of the majority, they care only to maintain their Elite status within human society.