Since Julian Assange had his Internet connection removed last week at the Ecuadorian Embassy in London there has been much speculation to the well-being of Julian Assange. Social media and the Alternative media have posed the question, is he still alive ?

Mr. Assange is still alive and WikiLeaks is still publishing. We ask supporters to stop taking down the US internet. You proved your point. pic.twitter.com/XVch196xyL

The wording and request of this tweet was out of character, firstly referring to Julian Assange as ‘Mr Assange’ is unusual, but then the request for supporters to stop taking the US internet is nothing but bizarre.

Then there was the death of Wikileaks founder and director Gavin MacFadyen, many reports were coming in claiming that he was ‘found’ dead, however, this is not the case and Gavin had been battling against Lung Cancer for some time.

On the 23rd Of October Wikileaks tweeted with the tweet signed JA. which if genuine would be the last known statement from Julian Assange:

Gavin Macfadyen, beloved director of WikiLeaks, now takes his fists and his fight to battle God. Sock it to him, forever, Gavin. -JA pic.twitter.com/7zyzs1Qxxk

Many people are now demanding actual evidence that Assange is still alive and well, but so far no evidence has been supplied. Wikileaks have acknowledged this request with the following statement:

There is good reason to be concerned about the life of Julian Assange, his work with Wikileaks has had huge political ramifications around the World. Hillary Clinton has made no secret in her feelings towards Assange:

With the thousands of leaks exposing Hillary Clinton’s corrupt campaign for US presidency over the last few months, Assange is a very big thorn in her eye and his death would be of great convenience.

Yesterday on the 26th October 2016 he allegedly did a telephone conference with the  CISL2016 Conference, however, the audio is poor:

Check back here for further updates. 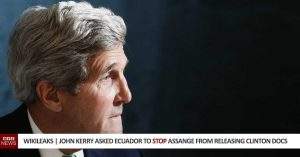 Julian deserves a statue, the man is a hero!