Monsanto is well known for many things, including Agent Orange, Aspartame and their Roundup-ready GMO range. But they have lots more to offer to the World than just this, they have a whole range of pesticides, most of which destroy and damage the Environment and any life that inhabits it – not least Dicamba as the Pesticide Action Network report:

Last fall, the U.S. Environmental Protection Agency (EPA) rubberstamped Monsanto’s newest formulation of the herbicide dicamba for use on the corporation’s genetically engineered (GE), dicamba-resistant soybean and cotton seeds. Expecting that this approval will lead to a dramatic increase in use of the herbicide dicamba, PAN and partners just filed a federal lawsuit challenging the agency’s decision to risk farmer livelihoods, community health and the environment.

The original version of dicamba, which is still on the market, has been around for over 45 years and is responsible for the third highest number of drift-related crop damage incidents in the U.S. Monsanto claims that its new formulation, ”XtendiMax,” is less likely to drift from the fields where it’s applied — although there is no guarantee that this newer, more expensive formulation will be used in place of the older, cheaper option.

For anyone who has been in a coma for the last Century or has just returned from a voyage to far off galaxies it may be worth checking the Monsatan, the Documentary outlines some of Monsanto’s finer points. 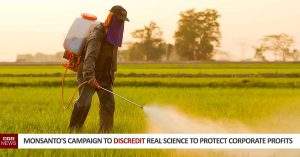 As with Glyphosate, the main active ingredient in Monsanto’s Roundup products, Dicamba is unlikely to be of any long-term use, in fact, the opposite is more likely – with persistent use of these products we see weeds building tolerance to the active ingredient and thus generating what is termed ‘Superweeds’

Jason Norsworthy, a weed expert at the University of Arkansas, recently conducted a study to test how quickly pigweed — the main weed of concern in soybean fields — develops resistance to dicamba. He found that after just three generations of heavy dicamba exposure, pigweeds were no longer susceptible to the herbicide. With increased use of dicamba on Monsanto’s GE crops, a new generation of superweeds is just around the corner.

And of course, as with just about all of Monsanto’s products, it has close links to causing cancer: 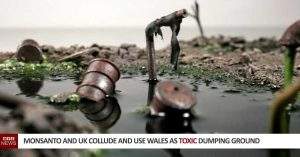