Facebook has had it’s time and place in the evolution of the Internet, it revolutionised what we now know as Social Media. However, it has gradually become more and more controlled, restricted and invasive. Facebook had its day, but it’s day is drawing to a close, as it did for Netscape, Yahoo and Myspace.

Social Media On The Blockchain

For anyone who took a long holiday to Pluto, Blockchain is, simply put, a distributed database which contains an ever growing list of records, these records are all timestamped an placed into blocks, each block references the previous block. Because of this, the blockchain is resistant to editing as each block is linked to the previous right back to the first block. This ingenious technology was first used in the Cryptocurrency Bitcoin.

Since the birth of bitcoin we have seen many more cryptocurrencies arise using this same blockchain technology. Many of which are not just another form of exchange, but offer far more.

Steemit is an uncensored social media platform built on blockchain technology. But thats not all, if your content is good – you get paid.

Thats right, Steemit rewards the best and most popular content and comments. We are not talking pennies for a post either, people are earning thousands of dollars per post.

Take a look at some of the current trending posts: 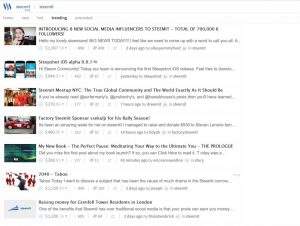 The first thing most people think when they learn about Steemit is – ‘So Whats The Catch?’ – Well, in this case there isn’t one.

Bloggers, Photographers, Musicians and Everything in between – If Your Not On Steemit Already, Why not!

Steemit is the perfect platform for any budding writer, avid blogger or struggling musician, because good content will be upvoted by those that deem it ‘good’  you can get paid for your contribution. If you have a webiste which you report and blog frequently about a particular topic, whether it be Finance, Entertainment news or Alternative News like ourselves , you should be on Steemit.

There is far more to learn about Steemit and posts can be far more complex than other platforms such as Facebook and Twitter. With the use of ‘short codes’ you can customise how your post will look. Or you can simply write some text and upload an image.

How do you get paid?

This again is another complex topic, however here is a quick run down on the basics of how it all works courtesy of Glenn Schweitzer.

There is Steem, Steem Power, and Steem Dollars.

Steem are the units that are bought and sold for actual money on the open markets. You can trade them as you would bitcoins or a company’s stock.

By keeping your currency as Steem Power Units, you will be able to make considerably more money in the long run because you essentially have ownership in the network. As the network grows, so will your piece of the pie.

And you’ll be heavily rewarded along the way. The way things are set up now, 90% of the new Steem Currency that is generated every single day is distributed to the people who already hold Steem Power Units in the form of additional Steem Power Units. (The other 10% goes to content creators and curators).

Half of the pay you receive for your content will be in Steem Power Units.

Also, the more Steem Power Units you have, the more your curation vote will count. You will have more influence on the site and you will also get paid more for upvoting other people’s work. (When you upvote someone’s work, they will get paid more as well.)

Steem Power Units also play one final and very important role. They prevent massive price swings and volatility on the open markets. Because everyone is locked in for 2 years, we can’t all sell our currency all at once if the market starts to dip, which would crash the price were it to happen.

Steem Dollars are the third and final form of the currency and never get diluted or lose their value. They are designed to be a stable currency that you can sell at any time. When you create popular content, 50% of your pay will be in Steem Dollars.

Your Steem and Steem Dollars can be sold easily on an cryptocurrency exchange such as Poloneix for Bitcoin, which can in turn be easily sold for fiat money. We will be publishing another article on the process of buying and selling cryptocurrency soon.

How Do I Start?

Well, firstly you’ll need to sign up for a new account at Steemit.com, the process is fairly straightforward, although you will need a mobile number to sign up. This is not for verifying who you are, but merely to ensure people don’t setup hundreds of accounts, as when you get a new account you also automatically receive around $7.00 of Steem. Once you have completed the sign up process your account will take a short time to verify.

Once your account is ready you can log in and join the community, you won’t regret it.

And don’t forget to Follow us on steemit @www.oye.news .

Childrens Health Defense filed a lawsuit on Monday charging Facebook, Mark Zuckerberg, and three of its so-called fact-checkers for...