With the upcoming presidential elections in France just around the corner, ‘Fake News’ is causing politicians to wake up in the middle of the night in fear. No longer can they just indulge in their criminal behaviour unhindered by public scrutiny, no longer can they deceive entire nations in peace. Time for action was needed, time to take control of the media and all that it spouts!

So Facebook and Google have teamed up with the French Mainstream Media to try and stamp out this dreaded problem. As I’m sure your all aware, ‘Fake News’ is not what is not what this is about, it is all about controlling the news, or more to the point, controlling the narrative.

Users will be able to alert Facebook to a story they suspect is false, which will then be checked by project partners. If two or more media groups highlight the story as ‘untrue’, Facebook will include a banner stating that alongside the story.

The project follows the social media giant’s partnership with US news organizations launched amid widespread and unproven allegations that fake news influenced the outcome of the US presidential election.

As soon as we heard of this we decided to see just how accurate this ‘Fact Checking‘ service was.

Site to be ‘Fact Checked’: www.cnn.com Quite amusing considering CNN is famous for it’s misleading and often entirely fake news. In the following video, Lee Camp shows just how pathetic CNN are at it as well:

Site to be ‘Fact Checked’: Snopes.com The legendary myth busters, Snopes.com, the last resort argument, “Snopes says FALSE”,  for all failed debunkers and sheeple alike. Snopes CEO, David Mikkelson, a man who’s own wife and co-founder accuse him of laundering money out of the company to pay for his prostitute habit.

Here is an excerpt from a previous article we published which sums up the credibility of Snopes.com quite well:

Now, should we really be placing our trust in a website who was founded and still operated by a man that cannot even remain trustworthy to his own wife, not to mention the laundering of Company money to fund his prostitute habit?

Alternatively, if we went down the lines of assuming Barbara’s accusations are false then we have to question the thousands and thousands of previous ‘fact-checks’ that Barbara has personally verified over the years. Either way, the site’s credibility is seriously compromised for Facebook, the Worlds biggest player in News media to rely on them for checking the authenticity of News articles is just insanity, but not unexpected.

Site to be ‘Fact Checked’: abcnews.go.com ABC News, Ah, America’s finest fake news broadcaster. For a News broadcaster that has deceived the masses for many years, you’d think they’d be much better at it. Clearly they are not!

And here is another example of just how trustworthy ABC News really are:

Site to be ‘Fact Checked’: www.davidicke.com Considering Davidicke.com only links to mirrored articles from other media outlets, many of which are mainstream, this ‘opinion’ is clearly not based on anything other than David Icke as a person rather than the content he shares. What’s even more hilarious, is the reference they have linked to is a BBC Interview by that moron Andrew Neil that David done last year. Andrew Neil listens to nothing and consistently just tries to discredit Icke by jumping on the ‘Reptilian’ theory.

If there was ever a media outlet guilty of producing fake news, it is the BBC themselves – they are the grandmasters of bullshit!

Unfortunately, this fact-checking service has yet to ‘review’ the BBC, and so no ‘opinion’ is given.

We have gone through many others and all are as you would expect, EVERYTHING in the Alternative Media is given the Red cross warning, while just about every mainstream media website is given the Green tick approval, except of course RT News: Not surprisingly they have been given the opinion of ‘regularly inaccurate‘ and a warning to ‘be careful and look for other sources‘. Although RT News is guilty of deception and misleading reports at times, it is fair to say they are no more guilty of this then all the Western Mainstream Media outlets they deemed ‘Trustworthy’.

We can conclude that everything we expected to happen with these ‘Fact Checking’ services, has happened. It’s not about separating fact from fiction, it’s all about suppressing News which does not fit the controlling Elites desired narrative of Worldly events. 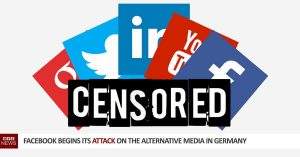