Richie Allen banned from Facebook for 30 days for posting this website’s response to the activities of Sean Adl-Tabatabai – it happens every time.

Why isn’t this man allowed to be criticised? – David Icke

So who is Sean Adl-Tabatabai? 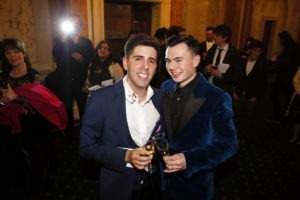 Sean Adl-Tabatabai is the former webmaster of Davidicke.com, he is one half of Londons first Gay married couple, he is also  the man behind the short lived ‘The Peoples Voice’ streaming TV station.

TPV was fronted by David Icke, however Sean Adl-Tabatabai was allegedly the man behind the operation, and as it turns out the man who controlled the £471,000 that was raised by public donations.

TPV was on air for only 4 months before being closed down. Its reason for such a short life was due to the announcement that David Icke was leaving the station, shortly after Icke’s departure TPV pulled the plug.

The exact circumstances behind David Icke’s sudden ejection from TPV is not known, but it’s clear it did not end well!

David Icke made the following statement at the time:

I have now been told by the TPV director, Sean Adl, and his marriage partner, that my input is no longer required and that I should not ‘interfere’ in what Sean Adl calls ‘his business’.

Sean Adl-Tabatabai then left the UK to start a new venture in Calafornia, Yournewswire.com. Most people who follow the Alternative Media will of come across Yournewswire at one time or another, the website offers Alternative news articles much the same as activistpost.com, Infowars.com and the countless other sites. The site has some good stories, it has plenty of ‘click bait’, and it is also an outlet for Sean Adl-Tabatabai’s personal hate campaigns.

If you take a look at the sites article’s relating to David Icke here I think you’ll agree this man has a serious chip on his shoulder.

The most recent article from Yournewswire , ‘David Icke To Speak In Raqqa, Syria, In Front Of 1000 ISIS Militants’, was returned with a response on Davidicke.com:

Why do you have such hatred Sean Adl-Tabatabai at Yournewswire.com?

Why do you continually shoot yourself in the foot trying (trying) to damage me? People deserve to know – what is your motivation? And who benefits?

It’s not just Icke that has been subject to these malicious attacks published at Yournewswire.com ; Zen Gardner has also been in Sean Adl-Tabatabai’s cross hairs:

and in another article from Adl-Tabatabai we see Noel Edmonds get dragged into this ‘hate’ campaign:

Sean Adl-Tabatabai is not someone we’ve ever had the pleasure of dealing with, but regardless of the reasoning behind Sean Adl-Tabatabai blatant hatred for David Icke, publishing malicious lies purely as an attack on anyone is unforgivable and really quite pathetic.

Sean Adl-Tabatabai Is a government disinfo agent. Never donate to anything he’s involved with.