Pathetic Labour MP Ben Bradshaw is saying it is ‘Highly probable’ that Russian Government interfered with the referendum. Before we continue we would just like to clarify this is not ‘Fake News’, as ludicrous as it may be this is indeed what Ben ‘EU Whore’ Bradshaw has said. All of the mainstream press have covered the story today, so it must be true!

What is likely fake though is the assumption that Russia had any part to play in the referendum results, the accusation has been made with zero evidence.

“What President Putin cannot achieve militarily he is already achieving using cyber and propaganda warfare,” the MP told the House of Commons on Tuesday.

“I don’t think we have even begun to wake up to what Russia is doing when it comes to cyber warfare,” he said.

“Not only their interference, now proven, in the American presidential campaign, [but] probably in our referendum. We don’t have the evidence for that yet. But I think it’s highly probable.”

Propaganda and Fake News is now the scapegoat for just about anything, like young children who don’t get their own way politicians left, right, and centre are throwing their toys out of the pram in the direction of Russia and the Alternative media.

The following video from James Corbett at the Corbett report breaks down this rather well and on a more serious note points out the worrying direction this is going as regards to our freedom of speech:

But should we expect any less, these are the same people who lie on a daily basis, these are people with no empathy for another. When you are as disconnected from the majority of humanity and it’s united consciousness as these people are should we really expect them to accept failure?

Failure is something they may have to get used to as we don’t see the uprising of the 99% to slow anytime soon. Enjoy the ride! 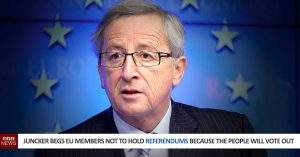