The Mainstream Media are now widely accepted as being nothing more than propaganda machines for the Governments they endorse.

You may remember several months ago an article we posted about a video emerging showing a US / CIA and UK backed terrorist group, Nour al-Din al-Zinki Movement beheading a 10 year old Palestinian boy called Abdallah Issa. Since then it has come to light that these same individuals who carried out the beheading were featured in a Channel 4 Documentary where they were interviewed and filmed providing humanitarian aid.

Channel 4 have since blocked the documentary from their Youtube Channel without explanation.

The footage which has since been removed by channel 4 can be seen below: 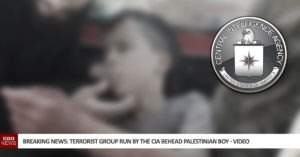