As protests still run rampant throughout the US in support and more commonly in defiance of Donald Trump and social media continues to remain in a perpetual storm of political bitchery, if you sit back and look around nothing has changed.

The World is still full of the same suffering it was six months ago, bombs still fall, families are still torn apart by War, Children still suffer and die.

The political left is acting like children and stamping their feet because Donald Trump beat the warmongering psychopath Hillary Clinton to the presidential seat; while the right begin licking the floor upon which Donald Trump walks upon.

But, in reality, what’s happened?

Nothing, another face to distract you from who really directs where our society is heading. Interest in the fraudulent political system has been dead in the water for the last decade, with the younger generations having little to no knowledge or interest in such things.

This has been quickly fixed , in the UK we had Brexit which has brought youngsters out in droves fighting for Unity, fighting to remain in the EU (they really had no clue what they were doing), it has also got many of the working class, who had lost interest in politics back in the picture fighting for closing borders and other such nonsensical ideas.

Mission accomplished, everyone distracted with the fraudulent, corrupt, paedophilic and often satanic Political Institution – While those with real power may continue as they were now, warring, conquering and manipulating the World to their own sick needs. 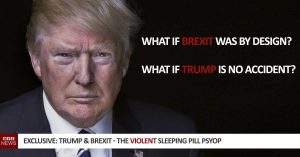