I have no doubt you all know who Alex Jones is and are familiar with his Infowars media network. Infowars is undoubtedly the most successful and therefore dominant Alternative News network today. In fact, Infowars is becoming almost borderline mainstream news not too dissimilar to Fox News.

If you’ve been following Infowars for a long time like myself you may have also noticed the sudden shift in productions quality, staffing and unfortunately alongside these things, the narrative. There is much to discuss on the subject of Infowars, however, this article is not the place for it, we are specifically talking about Alex Jones and Pizzagate.

There is no doubt that when the controversial #Pizzagate conspiracy first arose from the depths of Reddit, Alex Jones was pushing that it was ‘Real’ and ‘should be investigated’.

The following video clarifies this quite distinctly.

A few months later and Alex has done a full switch back on his original stance and apologises to James Alefantis. Although if you were to believe the Mainstream media you’d believe Alex was totally dismissing the Pizzagate conspiracy, this is not the case. Here is Alex discussing his change of stance on Pizzagate:

It’s clear that Jones has been forced to retract his statements about James Alefantis and not because as Jones would like us to believe, that he ‘realised Alefantis and Comet Ping Pong were all a distraction’, no, the reason is because Alex Jones and his Infowars network was under threat, we have to remember Alefantis has been described as one of the most powerful people in Washington.

One has to wonder how the owner of a Pizza joint can rise to be such an influential figure in a place like Washington, but that is an entirely separate discussion.

We’ve made it quite clear over the last couple years that we believe Infowars is now and has been for some time ‘Controlled Opposition’, this switch on his stance on Pizzagate only strengthens this theory.

The biggest ‘red flag’ in all of this is the level of intervention taken place, if you remember back at the beginning of the year following Ben Swann’s coverage on Pizzagate we saw his entire career destroyed within days, his social media presence closed, his ‘Reality Check’ program redacted and ended, he has now returned to being your standard news anchor reporting on stolen kittens and runaway brides on CBS46. 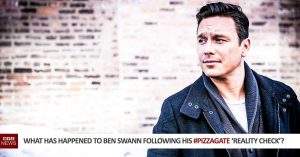 Now with Alex Jones making a public statement apologising about Pizzagate and all that he has said, even laying into many of his own audience calling them sheep and trolls, all this says one thing and that is that the theories and names mentioned were exceptionally close to the mark, maybe not 100% accurate, but closest enough for many people to become a little restless.

What better way to dismiss a conspiracy once and for all than by getting the Worlds most well known and successful conspiracy theorist ‘Alex Jones’ to apologise and all but dismiss Pizzagate.

Mainstream Media have predictably jumped straight on it, with many applauding even Alex for swallowing his pride and knowing ‘when to do the right thing’; which is of course in their opinion, apologise and see the light that Pizzagate is just fantastical conspiratorial nonsense entirely fabricated by mentally unstable minds somewhere in the dark dungeons of Reddit and 4Chan.

Then just to really confuse everyone, just days after his apology Alex tweeted the following:

I will release the biggest #pizzagate revelations ever at 4:00 CT https://t.co/OQtch0tDED

As I said before, Alex doesn’t entirely dismiss Pizzagate, but he didn’t need to. All he had to do was backtrack on certain key aspects, for example, the ‘Comet Ping Pong’ link and most importantly the Alefantis connection. Anything else he states is irrelevant, all the mainstream press have headlined that Alex Jones admits he was wrong on Pizzagate which satisfies the majority population. It is worth mentioning though that his audience don’t seem best pleased with any of this, just a quick scan through his Youtube and Twitter comments and you’ll see many are left wondering what on earth Alex is playing at: 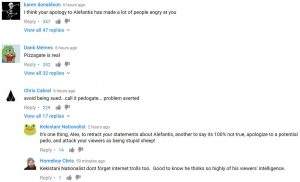 Whether Jones knows it or not, he is most definitely ‘Controlled Opposition’. 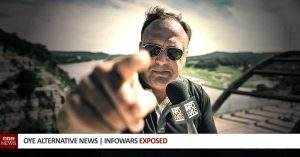 I’ve been watching Alex Jones since Bohemian Grove exposure in @1999. I believe now, he is obviously compromised. From within his own company. He said, he employes the good, the bad, the ugly, so to speak. The ugly ones (in pretty humanoid bodies). They are very powerful with bullying and with mind control. From very ancient primitive primary evil roots. This is what is happening now. Spewing out from underneath​ the rug. Good vs. evil. After Julian Assange was compromised and WikiLeaks was taken over. WikiLeaks said, to a private citizen investigating (who did a YouTube video), saying that, comet… Read more »

I’d tend to agree that his employees are an issue, but I believe Alex and his Infowars network as a whole have also been compromised and possibly for far longer than we all suspect. It is entirely possible Infowars spent 20 years gleaming support from the fringes of society until they became established enough and accepted enough to flip the narrative and brainwash the ‘truthers’ they already had on-board and appeal to the far-right hate culture that’s resulted from the ‘Fake Terrorism’ agenda being spewed from the MSM and Western Governments.

Is and always has been, controlled opposition, To say his Employees are the problem comes from s questionable source IMO