Trees Talk To Each Other, Feel Emotions And Form Social Circles Peter Wohlleben author of the new book ‘The Hidden Life of Trees’ believes that Tree’s talk to each other, feel emotions and form social circles. Although much of the media is mocking Wohlleben’s theories there is actually a lot of evidence to support this.

In the following excerpt from the book, Wohlleben talks about the social awareness he believes trees have: “Trees may recognise with their roots who are their friends, who are their families, where their kids are. Then they may also recognise trees that are not so welcome. There are some stumps in these old beech reservations that are alive, and there are some that are rotten, which obviously have had no contact with the roots of supporting neighbours. So perhaps they are like hermits.”

“It appears that helping neighbours in times of need is the rule, which leads to the conclusion that forests are super-organisms, much like ant colonies.”

The book is a fascinating insight into a possible social structure that modern man has become ignorant of.

Research by Professor Massimo Maffei at the University of Turin shows trees can distinguish the roots of their own species from other plants, and even pick out their own relations from other trees. Some are so tightly connected at the roots that they even die together, like a devoted married couple.

Diseased or hungry individuals can be identified, supported and nourished until they recover.

Dr Suzanne Simard of the University of British Columbia in Vancouver has discovered that they can also send warnings using chemical signals and electrical impulses through the fungal networks that stretch under the soil between sets of roots — networks known as the ‘wood wide web’.

These fungi operate like fibre-optic internet cables. Their thin filaments penetrate the earth, weaving through it in almost unbelievable density. One teaspoon of forest soil contains many miles of these tendrils.

Over centuries, if left undisturbed, a single fungus can cover many square miles and create a network throughout an entire forest. Through these links, trees can send signals about insects, drought and other dangers.

News bulletins are transmitted by chemical compounds and also by electricity, travelling at an inch every three seconds.

In comparison with the lightning impulses in mammal bodies, that is extremely slow. But there are species, such as jellyfish and worms, whose nervous systems conduct impulses at similar speeds. [source]

Whether you believe all this or not there is no doubt mankind has become ignorant of the World in which we live and all that inhabits it. Whether it be Animal, Tree, Insect or Mineral we all have a deep connection to one another and the soils of which we reside. Until we can wake-up and reconnect to this amazing, living, breathing World we can never truly gain peace on Earth. 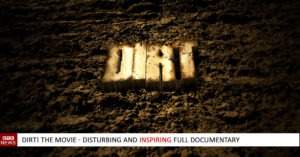