If you thought personal privacy could not be invaded anymore than it already is, think again. All thanks to a new Bill Gates funded technology which maybe hitting out streets soon.

According to documents filed with the US Federal Communications Commission (FCC), Boston-based Evolv Technology is planning to test its system at Union Station in Washington DC, in Los Angeles’s Union Station metro and at Denver international airport.

Evolv uses the same millimetre-wave radio frequencies as the controversial, and painfully slow, body scanners now found at many airport security checkpoints. However, the new device can complete its scan in a fraction of second, using computer vision and machine learning to spot guns and bombs.

This means individuals can simply walk through a scanning gate without stopping or even slowing down – like the hi-tech scanners seen in the 1990 sci-fi film Total Recall. A nearby security guard with a tablet is then shown either an “all-clear” sign, or a photo of the person with suspicious areas highlighted. Evolv says the system can scan 800 people an hour, without anyone having to remove their keys, coins or cellphones.

The CEO of the company behind the technology claims no anatomical imagery will be visible and no connection between the individual ‘inspected’ and their identity will be made or recorded:

“We never build an image that would enable anyone to see anatomical details, so there’s no naked peepshow in the first place,” says Michael Ellenbogen, Evolv’s CEO. “None of the raw data is stored and none of the data we do keep is traceable to an individual.

But do we really expect the information potentially gained from such devices would not be used to improve their already expansive profiling system of the Worlds population? 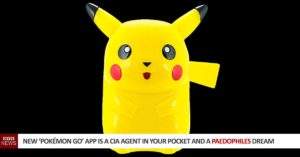