So if you live in the UK and you think such tyrannical practices such as forced vaccinations for children are just a thing of nightmares, you’d be wrong.

In this latest case, a mother has had her seven-month-old baby boy vaccinated against her will, The Mail Online reports:

The mum objected to her child receiving the jabs because she said her older children had had bad reactions to vaccinations in the past.

But the London Borough of Barnet said the potential consequence of not immunising the boy was too great to risk.

Now, after a hearing at the High Court, Mr Justice MacDonald has made a declaration that vaccination is in the boy’s best interests.

The jabs will protect the baby against bacterial infections which can lead to highly dangerous forms of meningitis.

She said three of her older children had suffered reactions – a swollen leg, ear infection and a rash – after receiving immunising jabs.

She said the risk of infection was low and so it was not worth the risk giving the boy the vaccines.

However, experts said the risks of not vaccinating were potentially disastrous.

Giving judgment, Mr Justice MacDonald accepted that vaccinating against a mother’s wishes would impinge on her human right to respect for her family life.

But he made a declaration that the boy receive the jabs – referred to in his ruling as the Hib vaccine and PCV vaccine.

So Justice MacDonald recognised that vaccinating the mothers child against her wishes was an act of tyranny, but chose to make the ruling anyway. 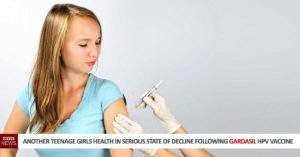