Conspiracy Theorists Were Right | A Shadow Government Rule The World! With all the recent Wikileaks revelations many of you may have missed the documents released by the FBI which reveal something far more shocking than anything we’ve seen from the recent Podesta leaks.

Buried deep within the documents is the mention of a ‘Shadow Government’ which is referred to as the ‘7th Floor Group’. This Shadow Government controls the direction of World events and ultimately are the puppeteers of the puppets who we are led to believe run our Countries.

“There was a powerful group of very high-ranking STATE officials that some referred to as ‘The 7th Floor Group’ or ‘The Shadow Government.’

This group met every Wednesday afternoon to discuss the FOIA process, Congressional records, and everything CLINTON-related to FOIA/Congressional inquiries,” This, of course, will not come as a major shock to many, but it’s mention from a state released document does add credibility to what ‘Conspiracy Theorists’ have been saying for decades.

There is no other mention or further detail on this ‘7th Floor Group’ shadow government in the documents but it is worth noting the usage of the ‘Number 7‘ in their code name….. 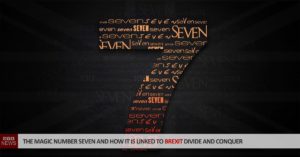