In the midst of several terrorist attacks and the shooting of the Russian envoy for Turkey a small announcement has been pushed through the press by Defence Secretary Michael Fallon, the BBC Reports:

Cluster bombs made in the UK have been used in the conflict in Yemen, the government has confirmed.

Labour said it was “deeply worrying” cluster bomb use had been confirmed. The UK is supporting the Saudi-led coalition which is fighting the Houthi rebel movement in Yemen.

In a statement to MPs, Mr Fallon said the UK had not supplied any cluster bombs to Saudi Arabia since 1989. But he added that Saudi investigations had concluded that some UK-made cluster bombs had been dropped. The BL-755 bombs will no longer be used by the coalition, he added.

The UK no longer supply cluster bombs to Saudi Arabia, however, they continue to supply over £3bn in weapons to warmongering oppressive regimes with Saudi Arabia still being their biggest customer.

The argument that the cluster bombs are no longer being supplied to Saudi is moot, the UK is still supplying death on a grand scale.

Amnesty International, which says it has documented the use in Yemen of a cluster bomb manufactured in the 1970s, has called on the UK to trace weapons made and sold before the ban.

He added: “It has become apparent that there was limited use by the Coalition of the UK-manufactured BL-755 cluster munition in Yemen.

“This munition was used against legitimate military targets to defend Saudi towns and villages against continuous attacks by Houthi militia, which resulted in Saudi civilian casualties.” 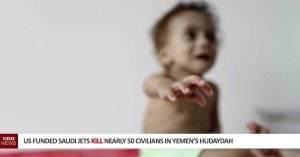