As the World mourns the loss of Barack Obama and the missed chance of having his Warmongering front-woman as President of the US, the Pentagon reveals that only 5 – 10% of the Civilian Casualties caused by Coalition Airstrikes are made public. RT News Reports:

On Wednesday, US Central Command spokesman, Major Josh Jacques, announced that the US anti-terrorist campaign had led to the deaths of 119 civilians since airstrikes began in 2014. A report released on the same day stated that 64 civilians had been killed and eight others injured in Syria between November 20, 2015 and September 10, 2016.

“We appreciate, to some extent, that the US authorities have come forward and acknowledged number of civilian deaths. We do… feel that it’s pretty insignificant, given the amount of killings, which they’ve likely caused,” Sammonds said, commenting on the Pentagon’s figures.

“Syrian human rights organizations have documented, at least, 650 civilian deaths,” he said, adding that Amnesty, on its part, “looked in detail at 11 cases, in which we believe 300 civilians were killed. And that’s in Syria alone.”

“With them having now announced something like this, like 119 civilians were killed across the two countries, that’s … perhaps 10 or 5 percent of the true civilian death toll from the US-led coalition attacks,”the researcher said.

Sammonds was skeptical about US claims that none of the 24 coalition strikes, in which civilians were killed contradicted the Law of Armed Conflict.

“They haven’t made public on what grounds they’ve found that. We would urge them to make this information public because we couldn’t second that at the moment. And we still have a lot of concerns that many of their attacks in those countries (Syria and Iraq) have likely violated international humanitarian law,” he said. 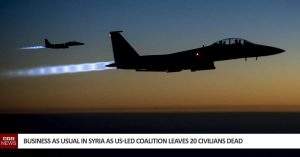