We’ve put together a few important videos which you need to see regarding the Syria Deception that has been drip fed to us. We will add to this article as the days go on, but the most important thing we need to understand is this:

Everything our Western Governments and their sidekicks AKA ‘The Mainstream News’ has been telling us is either lies or distortions of the truth.

The title video is Ben Swann exposing the supposed ‘Moderate Rebels’ that the West are continuously training and funding for the Jihadist Terrorists that they are.

Reality Check: Proof That Those “Moderate Rebels” in Syria are Really Jihadists. “These are not “freedom fighters” they are not looking to make Syria free, they are looking to enslave it.” Part 1

In the following video, Newsbud look at the events unfolding in Syria that no one wants you to know about!

On this episode of The Geopolitical Report, we counter the establishment’s narrative on the conflict in Syria and the flashpoint of Daraa, a town near the Syria-Jordan border where the CIA, working with the Muslim Brotherhood, attacked police and set the stage for a conflict that has so far claimed the lives of more than 400,000 Syrians. The proxy war is designed to take down a secular government and replace it with a Salafist principality controlled by the Brotherhood, a longtime CIA and British intelligence asset.

In another earlier episode of Ben Swann’s ‘Reality Check’, he looks at three things the media is not telling you about Aleppo.

Aleppo has been unceasingly painted by the corporate media as a humanitarian crisis, wherein Syrian President Bashar al-Assad is apparently waging war against his own people and indiscriminately using chemical weapons on civilians. Yet, this is categorically untrue and has actually been verified, many times. Anyone coming out of the area tells quite a contrasting story from what western media is trying to create. Yet, the lie continues. [source]

In line with what Ben Swann states in the above video here Eva Bartlett, a Canadian Journalist who has been in Aleppo and crushes the narrative that the MSM have been chucking at us:

You may remember the headlines circulating about Evacuees being shot as they fled Aleppo, this narrative has now come under scrutiny as filmmaker Carla Ortiz, a Bolivian filmmaker speaks to RT News:

“Many have asked me to show proof that people and children were not shot at on the streets while the evacuation took place as some media reported. So, this is what I saw: civilians evacuated on foot from the east, then transported in buses to the shelters. I am sorry, but there was absolutely no mass shooting on the evacuation,” Ortiz wrote in a Facebook post, commenting on the video.

She added that “what the Syrian army and civilians were doing was throwing food through the windows” of the buses that transported the evacuees out of the city.

Ortiz then went on to contest some other MSM narratives by doubting the authenticity of the so-called “witness reports” from then-rebel-occupied areas of Aleppo that quickly went viral on the western media. She particularly stressed that the eastern part of the city had no internet connection that could allow those witnesses to upload their footage or send them to the western media companies.

Ortiz also posted a clip of her documentary on Facebook, which can be viewed below: 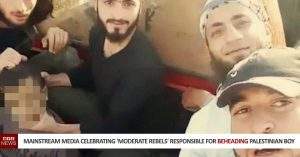