As we discussed in our previous article titled ‘Could World War III Soon Be A Reality ?’ the possibility of another World War look’s increasingly likely in the near future. Since the article was published last week further worrisome developments have been coming out every day.

The UK’s RAF have been given the ‘Green Light’ to shoot down hostile Russian Aircraft, IBT Reports:

Royal Air Force (RAF) pilots have been given the go-ahead to shoot down Russian military jets when flying missions over Syria and Iraq, if they are endangered by them. The development comes with warnings that the UK and Russia are now “one step closer” to being at war.

Then we also had the rumours that Russia had ordered all officials and any relatives living abroad to fly home, as tensions mount over the prospect of a global war, from the Dailymail:

Politicians and high-ranking figures are said to have received a warning from president Vladimir Putin to bring their loved-ones home to the ‘Motherland’, according to local media.

It comes after Putin cancelled a planned visit to France amid a furious row over Moscow’s role in the Syrian conflict and just days after it emerged the Kremlin had moved nuclear-capable missiles nearer to the Polish border.

Russian mainstream television is warning of potential Nuclear War to its citizens as relationships crumble between Russia and the West:

With diplomatic relations between Moscow and Washington at their lowest point since the Cold War, turning on Russian television can be an alarming experience. For the past month, Russian media outlets have been punctuated with reports asking people whether they are ready for nuclear war.

“If it should one day happen, every one of you should know where the nearest bomb shelter is. It’s best to find out now,” according to one particularly fevered report on the Russian state-owned channel, NTV. [Source]

Russia is also flexing it’s muscles by showing off its ‘unrivaled new weapon’, Russias new radio-electronic weapon is capable of knocking out onboard electronics of it’s target, effectively downing any oncoming enemy aircraft or drone:

The announcement came during the ‘Arms High-tech’ military exhibition currently taking place in Armenia. The state-of-the-art system is capable of disabling various types of targets without using the traditional rounds or shells. Instead, the weapon uses ‘directed energy.’

“It conducts indirect physical impact on the on-board equipment of aircraft or drones and neutralizes precision-guided weapons,” RIA quotes the OPK representative as saying.

The weapon was for the first time presented to Russian military officials in September this year during a closed performance at the annual military expo ‘Army 2016’ outside Moscow.

US Army Bosses have made public predictions that the likely War with Russia and China would be ‘Terrifying’ , The Mirror Reports:

As reported by Defence One, he said: “A conventional conflict in the near future will be extremely lethal and fast, and we will not own the stopwatch.

“The speed of events are likely to strain our human abilities.”

He said China and Russia are building huge armies which rely increasingly on technology.

And he admitted this is forcing military chiefs to prepare for “violence on the scale that the US Army has not seen since Korea”.

Nuclear War would be devastating for life on earth and if your thinking ‘Who in their right mind would press the button?’ then look no further than the US. They are the first country to produce Nuclear Weapons and the ONLY Country to ever use them:

The United States was the first country to manufacture nuclear weapons, and is the only country to have used them in combat, with the separate bombings of Hiroshima and Nagasaki in World War II. Before and during the Cold War, it conducted over a thousand nuclear tests and tested many long-range nuclear weapons delivery systems. [source]

With a death toll somewhere in the region of a quarter of a million the Nuclear attacks in Japan were by far the most devastating acts of War ever committed.

Whether publically or discreetly you can have no doubt that behind all Western Government veils, preparations for all out War are taking place. With the UK and US politicians showing no signs of slowing down their irrational tirade against Russia, there seems only one way this can currently go. 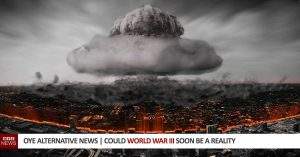