You may have heard of the recent deaths in Syria, where the US-led coalition killed 62 Syrian Army personnel, however, you may have missed the deaths of almost 50 people in Yemen yesterday.

The attack took place in the Hudaydah province in a busy marketplace, earlier in the day a residential area was targetted.

Nearly 50 civilians have been killed and scores more injured in a Saudi airstrike on Yemen’s western Hudaydah province.

The strikes were carried out against a busy marketplace in the province’s Hawak district late on Wednesday.

Earlier in the day, Saudi warplanes targeted residential areas in the northwestern province of Sa’ada.

Meanwhile, Yemeni forces have carried out a retaliatory missile attack on a Saudi military base in the kingdom’s southern Najran region.

On Tuesday, Saudi airstrike killed 12 children and three women on an attack in the country’s province of Jawf.

Saudi jets also carried out some 12 bombing raids on the capital city of Sana’a, killing one civilian and injuring a number of others.

Back in August 10 Children were killed in an attack which left a school obliterated in Haydan, Yemen:


These deaths are not unique, they are normality in Yemen, the deaths of innocent people, including a huge amount of Children are in the tens of thousands.

Last year it was reported that in a 34 day period 9500 people were killed & Injured in bombing by the Saudi presence in Yemen.

International Aid Organization warns of “humanitarian catastrophe” as Saudi’s bombing continues.According to a report by Yemen’s Freedom House Foundation, Saudi airstrikes have killed 3,512 Yemeni people, including 492 children and 209 women, since the beginning of the aggression until April 25.

The report added that 6,189 people were injured, including 978 children and 713 women, during the same period.About 95,000 families have been displaced due to the Saudi-led airstrikes, according to the report.

At least 115 children have been killed and 172 maimed as result of conflict in Yemen since 26 March, Unicef said recently.Red Cross spokesperson says “humanitarian catastrophe” unfolding as air strikes and clashes continue across the country.

Saudi-led coalition warplanes pounded overnight and early Tuesday Yemeni capital, Sanaa, and in the south, while officials criticized attempts by the Saudi to airdrop weapons to pro former and fugitive Hadi’s fighters in Yemen. – Alalam.ir Children are the biggest victims in any War, and Yemen is no exception. Children are starving, injured, diseased, homeless and often without family. 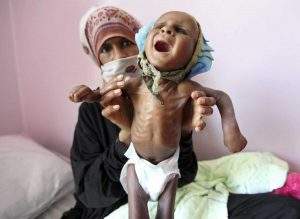 A 10-year-old girl from Yemen, whose heart-wrenching YouTube video plea for an end to the violence in her homeland has touched social media users, has spoken to RT about the constant fear of death she has to live with in the war-torn country:

Our Taxes support these crimes of terrorism, we have a moral responsibility to make ourselves heard and demand it stops – right now!