The infamous globalist and master manipulator of the masses has died at his home in his sleep at the prime age of 101.

Rockefeller died in his sleep at home in Pocantico Hills, New York, on Monday morning as a result of congestive heart failure, according to a family spokesperson Fraser P. Seitel.

The businessman, who had an estimated fortune of $3 billion, retired as head of Chase Manhattan in 1981 after a 35-year career. [Source]

David Rockefeller has been quoted many times by Conspiracy websites and Mainstream websites alike, one of his most famous quotes which was written in his ‘2002 memoirs’ was this:

“For more than a century ideological extremists at either end of the political spectrum have seized upon well-publicized incidents such as my encounter with Castro to attack the Rockefeller family for the inordinate influence they claim we wield over American political and economic institutions.

Some even believe we are part of a secret cabal working against the best interests of the United States, characterising my family and me as ‘internationalists’ and of conspiring with others around the world to build a more integrated global political and economic structure–one world, if you will. If that’s the charge, I stand guilty, and I am proud of it.” 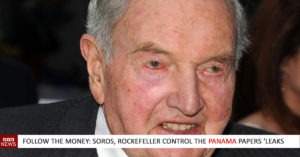