We’ve heard continuously about the uprising of ‘Fake News’ and how the likes of Google and Facebook intend to crack down on such sites.

Well, we have taken the time to sift through the web and dig out some of the worst offenders.

BBC News is the right-hand of the UK Government, funded by the citizens through a forced Tax applicable to anyone that possess a Television.

The BBC is renowned for their state biased propaganda, they have been brainwashing the masses for decades and repeatedly publish ‘Fake News’

The Daily Mail is a long-running UK tabloid newspaper with an online presence also. They consistently publish false and outright ridiculous articles:

This year, the Mail reported that disabled people are exempt from the bedroom tax; that asylum-seekers had “targeted” Scotland; that disabled babies were being euthanised under the Liverpool Care Pathway; that a Kenyan asylum-seeker had committed murders in his home country; that 878,000 recipients of Employment Support Allowance had stopped claiming “rather than face a fresh medical”; that a Portsmouth primary school had denied pupils water on the hottest day of the year because it was Ramadan; that wolves would soon return to Britain; that nearly half the electricity produced by windfarms was discarded. All these reports were false. [Source]

Longtime running CNN News owned by owned by the Turner Broadcasting System division of Time Warner is a Cable and Satellite World News Service offering the latest in US biased propaganda and ‘Fake News’.  The News service is commonly referred to as the ‘Criminal News Network’ due to its deceptive reputation.

Fox News Channel, also known as Fox News, is an American basic cable and satellite news television channel that is owned by the Fox Entertainment Group subsidiary of 21st Century Fox. They claim they offer a fair debate and sporadically they do cover stories which other news platforms won’t touch, but unfortunately they are also great at producing ‘Fake News’.

The following video is an interview with German Journalist Dr. Udo Ulfkatte who reveals how he was taught to like and deceive the masses by providing  fake news – A must watch!

ABC News is quite literally the Mickey Mouse of New Media, A division of the American Broadcasting Company, owned by the Disney Media Networks division of The Walt Disney Company. There reporting is pathetic and aside from the total non-factual content, they air most of their content is pure brain numbing dribble. They recently got caught staging a crime scene for one of their reports: 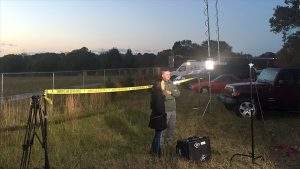 Viewers were presented with the sight of Davis standing in front of yellow police tape with the words “SHERIFF’S LINE DO NOT CROSS” and ABC News, reporting from the site for hours, claimed Davis was in the middle of an active crime scene.

But she wasn’t. The ABC News report had more in common with a Hollywood production than a breaking news report.

Linsey Davis was actually standing in a field in Woodruffe, South Carolina – not at the crime scene she was claiming to be reporting from. Sources with knowledge of the matter say the sheriff’s tape was placed there by the ABC News crew for the purpose of its inclusion in the live shot.

But ultimately it is down to you, the readers to do your own research regardless of where you read or hear about a story. Never place your trust in any single given News report, search for other coverage on the same story, look at news reports from all around the World. It’s also worth noting that even some of the most reliable sources make mistakes or are given false information.