The FDA have approved the use of genetically engineered mosquitoes to combat Zika. RT Reports:

Genetically engineered mosquitoes have been approved for field trials in Florida by the Food and Drugs Administration, in order to battle the spreading Zika virus. The federal agency says it “will not have significant impacts on the environment.”

Trials have already taken place in Brazil and Panama, but critics argue that female mosquitoes developing a preference for‘normal’ males could reduce the project’s effectiveness.

The scheme, led by British-based biotech company Oxitec, created the transgenic male Aedes aegypti mosquito, with a trait designed so that any offspring will require antibiotics to develop beyond the larval stage.

The approval announced by the Food and Drug Administration on Friday does not mean the agency has approved the genetically engineered (GE) mosquito for commercial use. The field trials will also require approval by Floridians.

Although the Zika propaganda has somewhat slipped out of the News in recent months it does appear to be coming back in to the limelight, we saw just yesterday in Miami the local authority spraying an entire 10KM area with poisonous Insecticide. 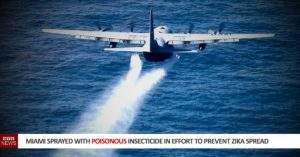 And now we hear of the first Zika outbreak native to the US being reported: