Five suspects have appeared in court in France charged with terror offences in relation to the Nice truck attack.

The four men and one woman, aged between 22 and 40, are accused of helping driver Mohamed Lahouaiej-Bouhlel prepare the terror attack.

One of the suspects returned to the scene of the attack the following day to film the aftermath, French prosecutor Francois Molins said.

Mr Molins told a news conference the crime had been planned for months.

The Islamic State group claimed Saturday that the Tunisian man who barrelled his truck into a crowd in the French resort city of Nice was a “soldier” of the group. It’s the first claim of responsibility for an attack that claimed 84 lives at a July 14 fireworks display for France’s national holiday.

The claim – circulated on social media by a news outlet affiliated with the group – didn’t name Mohamed Lahouaiej Bouhlel, the 31-year-old Tunisian who authorities say was behind the wheel as a truck crashed into revelers Thursday night. But the statement quoting an IS security member said the man was following calls from the group to target citizens of countries fighting it. –

The veracity of the group’s claim couldn’t immediately be determined, but French officials didn’t dispute it.

Five people believed to be linked to the man who killed 84 people in Nice are in police custody, the Paris prosecutor’s office says.  Three arrests were made on Saturday and two on Friday, including the man’s estranged wife, Le Monde reported. Mohamed Lahouaiej-Bouhlel drove a lorry into crowds marking Bastille Day on the Promenade des Anglais on Thursday before he was shot dead by police. So-called Islamic State claimed one of its followers carried out the attack. – BBC News

The driver of the lorry has been identified by officials as Mohamed Lahouaiej Bouhlel, a 31-year-old man of Franco-Tunisian origin.

Bouhlel, a delivery driver who separated from his wife two years ago, has a criminal record for domestic violence, theft and possession of weapons. He was also on probation after he recently fell asleep at the wheel and crashed into four vehicles on a highway, it is claimed. Hauntingly, Bouhlel told police he was delivering ice cream when they questioned why he was parked on the promenade for nearly nine hours before he launched his attack.

Authorities said they found identity papers belonging to a 31-year-old French-Tunisian citizen in the truck, as well as “guns” and “larger weapons”.

It never ceases to amaze me just how organised these terrorists are, they always appear to carry identity papers or passports even when performing stressful tasks. Takes me weeks to find my identity papers, if I find them at all!

“France is filled with sadness by this new tragedy,” Hollande said, noting several children were among the dead in what he said he had no doubt was an act of terrorism.

“Nothing will lead us to give in, to give up our fight against terrorism. We will continue to reinforce our actions in Syria and Iraq,” Hollande said, according to a translation of his remarks by France 24. “We will continue to strike those who are attacking us on our own soil.”

There were reports of gunshots and people have been told to stay inside.Earlier, there were widespread reports of a hostage situation in the Buffalo Grill restaurant in Nice and gunfire at the Meridien Hotel. 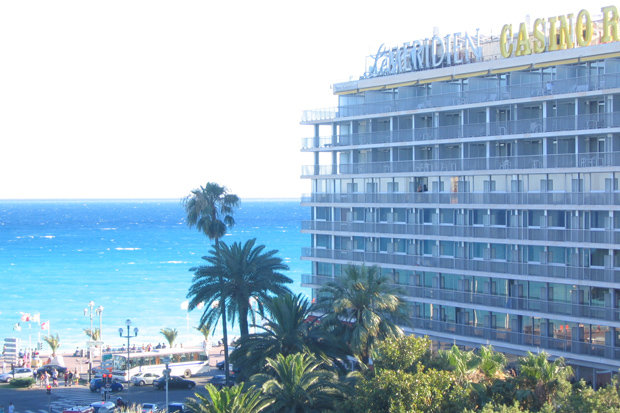 ISIS affiliated  Twitter accounts are linking the attack to the death of Omar Shishani. But all is speculation – it will be interesting to see what the ‘official’ narrative presented to the public is for this one. We’ll be analysing this as and when we obtain more information. Our thoughts go to the families who have lost people they love #PrayForNice

Reports of the Eiffel Tower being on fire shortly after the attacks, cause unknown:

In a pre-dawn address to the nation, President Francois Hollande called up military and police reservists to relieve forces worn out by an eight-month state of emergency begun after the Islamic State militant group killed 130 people in Paris. The state of emergency has been extended.

A truck has crashed into a crowd of revellers celebrating Bastille Day in the French city of Nice – prompting fears of terrorism, Peter Allen reports.

Horrific images depicting men and women lying on the side of a road close to the Promenade des Anglais appeared on social media.

Reports on French tv that the driver of the truck was shot dead by police.

Witnesses describe there being “bodies everywhere“.

One eyewitnessed raised fears that the incident “had to be planned” and others said the driver of the truck had deliberately chased down and run over people attempting to flee the scene.

Reports are now coming in from various sources claiming death toll has risen to 60 people.

Nice mayor Christian Estrosi, who was at the celebration when it happened, tweeted: “Dear people of Nice, the driver of a truck seems to have left dozens dead. Stay for now in your home. More info to come.”