Turkey’s interior minister says three others wounded in the attack, but not in serious condition.

“This murder is clearly a provocation aimed at undermining the normalisation of Russia-Turkish relations as well as at undermining the peace process in Syria promoted by Russia, Turkey, Iran and other countries interested in promoting settling the crisis in Syria,” Putin has said.

“The only response we should offer to this murder is stepping up our fight against terror, and the criminals will feel the heat.”

Or could this assassination be in retaliation against what was said by Bashar Jaafari the Syrian UN representative at the Aleppo resolution meeting earlier in the day, Bashar condemns the west, specifically the UK and France for protecting the terrorists rather than assisting the Syrian Government and Russia.

The Speech by Dr Al Jaafari exposing the presence of NATO officers and special services in East Aleppo. Amb. Bashar Jaafari says the whole purpose of the “hysterical” UNSC resolution over the past 3 days was for certain Security Council members to gain ground access to “rescue” their nationals. US, Isreali, Turkish, Qatari and Saudi secret service officers are trapped in Eastern Aleppo. Names are given in his speech:

#Turkey: Video footage of the moments of the assassination attempt on the Russian ambassador in #Ankara. pic.twitter.com/hy4rUvONfB

The Russian ambassador to Ankara has been killed in a gun attack at an art gallery in the Turkish capital, Russian news agency RIA Novosti reported.

Reports said Andrei Karlov was attending the opening of an exhibit at a contemporary arts centre when he was attacked. Karlov was several minutes into a speech at the exhibit when a man shouted “Allahu Akbar” and fired at least eight shots, according to an AP photographer who was present.

The attacker also smashed some of the photographs, AP reported. A source told RIA Karlov had died at the scene.

Turkey’s NTV reported that the gunman had been killed by police.

Turkish officials said the assassin entered the building claiming he was a police officer. Other bystanders alleged he shouted “Aleppo” when he shot Karlov, but the claims could not be immediately confirmed. 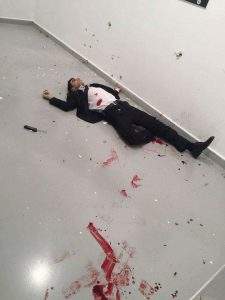 ‘It being reported in Ankara that the policeman named as the gunman who shot the Russian ambassador had been assigned to PROTECT him.

Local media Posta reported that he had been in the role for around a week – yet to be officially confirmed – before he shot his victim in the back today.

It is known that the gunman – named locally as Mevlüt Mert Altıntaş – had entered the exhibition hall by showing his police identity cards.’

We will keep you updated with any developments on this story as they come in.